Around 10,000 Ukrainians immigrated to North Dakota between 1896 and 1899, according to a 1984 book by Francie Berg called “Ethnic Heritage in North Dakota.” The timing is significant because North Dakota had just become a state in 1889. Ergo, Ukrainian culture began intertwining with North Dakota heritage during the first few years of statehood.

Even today, Wikipedia, with data collected from the 2020 U.S. Census Bureau, stated that North Dakota has 2 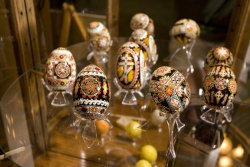 cities listed in the top 20 U.S. communities with the highest percentage of people claiming Ukrainian ancestry: Belfield and Wilton. In fact, a map of the United Stated published in the report showed some of the highest concentrations of Ukrainians across the entire U.S. were located in western North Dakota.

While each family came for their own reasons, typically economic or political, they brought their ancient cultural traditions and began sharing them with their new communities. From cooking traditional foods, such as Pyrohy – pasta “buttons” delicately filled with potatoes and cottage cheese or sauerkraut – to the practice called Pysanky – a  very delicate and intricate method of decorating Easter eggs – the Ukrainian heritage started to become a North Dakotan way of life. 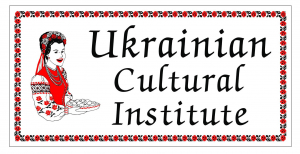 In 1980, Ukrainians from North Dakota living in the Dickinson area began the Ukrainian Cultural Institute (UCI) in an effort to “preserve the Ukrainian culture in North Dakota.” The main location on Villard Street includes offices, a large kitchen, gift shop, the Marie Halyn Bloch Library and a large open space used for Lenten Lunches, board meetings, choir practices, and more.

In an effort to document some of the artistic Ukrainian heritage in our state, the North Dakota Council on the Arts (NDCA) published a book in 1997 called “from the Wellsprings: Faith, Soil, Tradition – folk arts from Ukrainian culture in North Dakota” by Folklorist Troyd Geist which outlined five of the most common Ukrainian art forms practiced in North Dakota. They were as follows: embroidery, decorative ritual bread making and wheat-weaving, cymbaly making and playing, and probably the most unique to Ukrainian culture, the practice called Pysanky, referenced above.

North Dakota plays a vital role in the recent tragedy facing Ukraine as it can house and protect the most valuable treasure of all – Ukrainian people and the cultural traditions they practice and share. In the Spring 2022 UCI Newsletter, President Cathy Logosz said, “I’m expecting that many refugees will make their way to North Dakota, as they did 100 years ago. Let’s be prepared to welcome them with open arms.”

As to the war on Ukraine, it’s been a powerful force in bringing people together for a common cause – save the Ukrainian people and preserve Ukrainian culture. It is imperative that these traditions be passed on, remembered, practiced, and celebrated for generations to come.