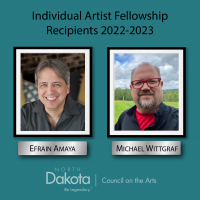 North Dakota Council on the Arts (NDCA) has awarded two artist fellowships, each in the amount of $5,000. The Individual Artist Fellowship recipients in Music are Efrain Amaya of Minot, and Michael Wittgraf of Grand Forks. 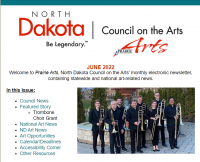 Check out NDCA's Prairie Arts June 2022 newsletter for the latest in statewide and national arts-related news. You will find an article about ND's ONLY trombone choir, along with a variety of opportunities available to artists and arts organizations across North Dakota! 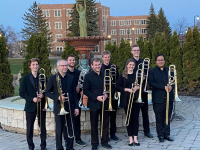 In the spring of 2022, University of North Dakota (UND) Teaching Assistant Professor, Author and Composer Dr. Chris Gable wrote an eight-part composition for the North Dakota Trombone Choir called Alarum Within. The project was meant to portray the negative impact on society caused by the COVID-19 Pandemic. 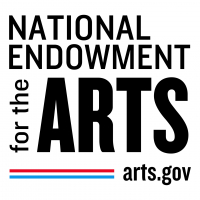 NDCA announces Board of Directors meeting

NDCA announces Board of Directors meeting 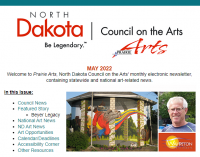 Check out NDCA's Prairie Arts May 2022 newsletter for the latest in statewide and national arts-related news, along with a variety of opportunities available to artists and arts organizations across North Dakota! 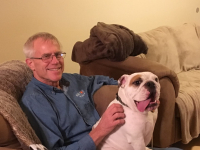 After 42 years of service, Wayne Beyer is retiring from Director of Wahpeton Park and Rec. To explain the strong connection he experienced with the art world, Wayne wrote, "Parks and recreation is very diversified and art has been a great way to offer many unique opportunities."

NDCA announces request for proposals for placemaking in Region 1

North Dakota Council on the Arts announces request for proposals for placemaking in Region 1.

Around 10,000 Ukrainians immigrated to North Dakota between 1896 and 1899, according to a 1984 book by Francie Berg called “Ethnic Heritage in North Dakota.” The timing is significant because North Dakota had just become a state in 1889. Ergo, Ukrainian culture began intertwining with North Dakota heritage during the first few years of statehood. 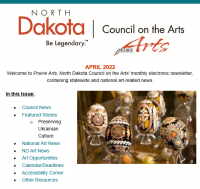 Check out NDCA's Prairie Arts April 2022 newsletter for the latest in statewide and national arts-related news, including an article about the history of Ukrainian culture in North Dakota and how community members are working to preserve the unique heritage in the state.