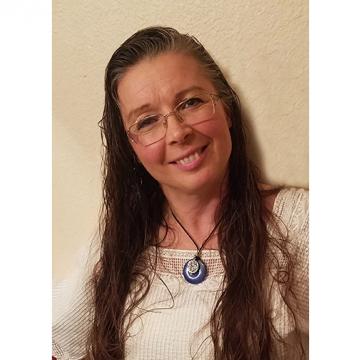 Melissa Gordon has been an artist all of her life, selling her first commissioned work at 12 years of age. She has won numerous awards for her realistic renderings around the state and has many works in private collections across the country. Melissa has had a number of solo shows and participates in many regional group shows throughout the year. Recently, she has become known for large-scale work done around the Bismarck-Mandan area, including her mural of Sitting Bull in Alley 5.5 being featured on the cover of Parade Magazine.

After over 10 years as a graphic artist, designer and Art Director, she has worked  independently for nearly twenty years as a freelance artist and illustrator specializing in drawing mediums and a return to fine arts.  Her work is currently featured in and on murals, books, greeting cards, rubber stamps, embroidery designs and even satellite dishes. Her most visible work is “Beauty at a Glance”, a mural that stretches a half a city block in downtown Bismarck. She is the 2016 Citation Award recipient at Bismarck Arts and Galleries and was won several Best of Show Awards with her work.

Melissa also enjoys teaching and has taught in a variety of settings to age groups ranging from kindergarten to senior citizens and has a special interest in at-risk groups. She belongs to many local arts organizations and was a founding member of Bismarck Downtown Artists Cooperative . She has served as a board member of Dakota West Arts Council and was appointed to the North Dakota Council on the Arts in 2015 by Governor Jack Dalrymple.

In addition to her work as an artist, she is also an active member of the community and does volunteer work for many area organizations including Bismarck Arts and Galleries Association, Dakota West Arts Council, Special Olympics and Arts For All.