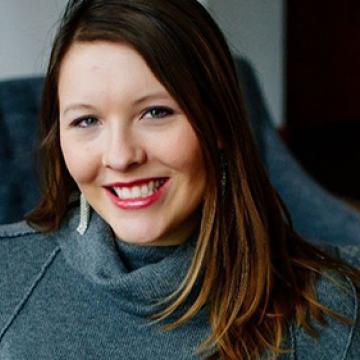 Emily Montgomery, a Grand Forks native, grew up on a Red River Valley farm and graduated from the University of North Dakota in 2011 with degrees in English and Music, and a minor in Nonprofit Leadership.

Montgomery’s extensive involvement in the arts began at an early age in music, theater, and dance. This involvement continued throughout college with roles in musical productions by the now-defunct Crimson Creek Collegiate Players and singing with the Concert Choir.  Simultaneously, Montgomery danced as a company member and maintained a rigorous teaching schedule at the North Dakota Ballet Company, eventually being promoted to Academy Director in 2010.

Upon graduation, Montgomery’s commitment and passion for her state and community led her to remain in Grand Forks.  While working as Academy Director at the North Dakota Ballet Company, she was instrumental in creating a standardized Cecchetti dance curriculum for the school while continuing to dance, teach, and choreograph. She also maintained her involvement in music by singing as an auditioned member of the Grand Forks Master Chorale.

In 2012, Montgomery was named Executive Director of the historic Empire Arts Center, a historic theater in the heart of downtown Grand Forks. Since taking the helm of the Empire, Montgomery has led the way through a number of exciting changes, including a partnership with the University of North Dakota to display their world-class art collections on a permanent basis at the Empire, the founding of the Empire Theatre Company, the renovation of the Empire's backstage space and subsequent concert series "The Backstage Project," the renovation of the Empire's basement and the resulting black box theater "Studio E," and more. Recently, the Empire announced yet another new program:  The Edge New Works Festival, dedicated to newly-produced theater, dance, and music created by local and regional artists. In the fall of 2019, Emily left her position at the Empire Arts Center to pursue other avenues with her family farm.